GR&AP assisted in the development of Namibia’s legislation on domestic violence, the Combating of Domestic Violence Act 4 of 2003, which came into force in 2003, and with the accompanying regulations which include the relevant forms.

The law covers a range of forms of domestic violence, including sexual violence, harassment, intimidation, economic violence and psychological violence. It covers violence between husbands and wives, parents and children, boyfriends and girlfriends and between family members.
The law gives those who have suffered violence alternatives to laying criminal charges, by setting up a simple, free procedure for getting a protection order from a magistrate’s court. This is a court order directing the abuser to stop the violence. It can also prohibit the abuser from having any contact with the victim. In cases of physical violence, it can even order the abuser to leave the common home. It is possible for people who have suffered domestic violence to seek a protection order and lay a criminal charge at the same time if they wish.

Background to the law

In 1998, GR&AP produced a report based on comparative law research entitled Domestic Violence: Proposals for Law Reform, This report contained a draft bill on domestic violence which was workshopped with key stakeholders.

In 2000, GR&AP hosted a workshop entitled “Domestic Violence Legislation: Lessons from South Africa”, which brought experts from South Africa to Namibia to discuss success and failures with law reform on this topic which could be instructive to Namibia.

In 2000, GR&AP also worked together with the Legal Education Unit of the Legal Assistance Centre to host a national conference for men on the topic of violence against women. This workshop was attended by 250 men from all over Namibia, as well as by guest speakers from Zimbabwe, South Africa and Canada. The conference was successful in inspiring Namibian men to begin work around the issue of violence against women.

In 2001, the Law Reform & Development Commission (LRDC) published a report containing a draft bill on domestic violence. The report of the LRDC acknowledged the contribution of GR&AP in the preparation of this bill, as well as the usefulness of some of its other work around violence. GR&AP was part of the subcommittee of the LRDC which prepared this report.

The Combating of Domestic Violence Act came into force in 2003.

Read newspaper articles from our archive relating to this law reform:

GR&AP has produced a detailed Guide to the Combating of Domestic Violence Act aimed at service providers.
GR&AP has hosted workshops to train police, social workers, prosecutors, magistrates and medical professionals on the Act. In 2005, GR&AP published Guidelines for Service Providers on the Combating of Domestic Violence Act of Namibia, intended for persons in these professions who deal with domestic violence cases. The Guidelines were developed by the professionals themselves and compiled by GR&AP.
GR&AP has also prepared a training DVD aimed at clerks of court, looking at their role in implementing the Combating of Domestic Violence Act. This DVD is available from the LAC office.
GR&AP has also produced a circular aimed at service providers on Protecting children affected by domestic violence (2013). 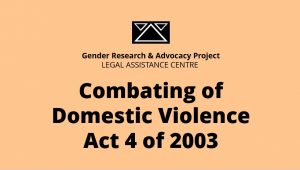 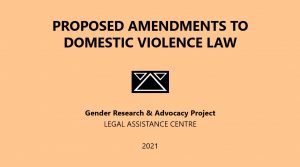 GR&AP has produced a range of publications containing simple information about domestic violence, particularly on how to use the law to get protection orders: 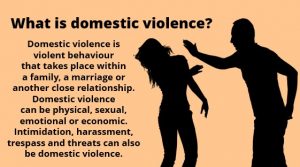 Combating of Domestic Violence Act 4 of 2003 in a 39 page Powerpoint format.

GR&AP has also produced a 47-minute film called Love and Respect, which examines rape and domestic violence in local settings. The film is available in five languages (English, Afrikaans, Nama/Damara, Oshiwambo and Otjiherero).

A second local feature-length film commissioned by GR&AP is Whispers in the Wind, which depicts a Namibian family experiencing both serious and subtle forms of domestic violence.

We have also produced a set of five short animations on child abuse, which highlight subtle forms of child abuse – destroying a child’s self-esteem by shouting and using abusive language, failing to immunise children, keeping children out of school to attend to household chores, failing to pay maintenance and drinking and smoking during pregnancy. Each slot begins with the question “What is child abuse?” and ends with the tagline “This is child abuse. Let’s love our children.”

We also have a 10-part soap-opera style radio series available in Afrikaans called In die Familie (In the Family). Each 12-minute episode touches on an aspect of domestic violence or child abuse.

The films and radio spots are available to rent or buy from the LAC office. 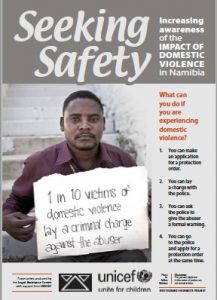 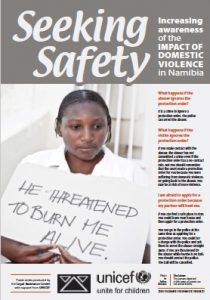 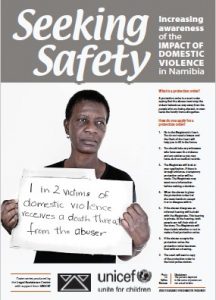 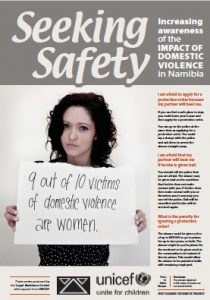 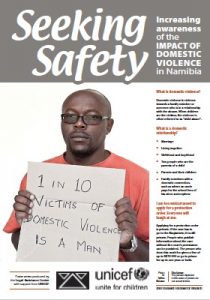 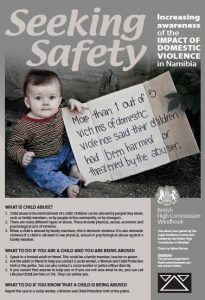 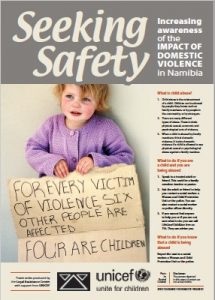 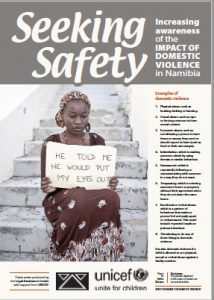 In 2012, GR&AP published Seeking Safety, an extensive study of the operation of the Combating of Domestic Violence Act. The study is based on data from the court files of 1 122 protection order applications from 19 different magistrates’ courts in 12 regions – covering the vast majority of applications filed in the first three years of the law’s operation. The study also drew on a total of 60 interviews, mainly with magistrates and clerks of court, and group discussions with traditional leaders, police and magistrates. We also examined reported and unreported judgments of the High Court to see how the Combating of Domestic Violence Act features in criminal cases.

You can read the full report or a shorter summary version of it. You can also read an even shorter research brief which summarises the key findings.

For a quick overview of the report, see the press release issued at the time.