Encouraging equal opportunities in the workplace

The pamphlet provides ideas on how an employer can put the provisions into meaningful practice and gives suggestions on how to go beyond the basic provisions to encourage real and practical change that will encourage equal opportunities in the workplace.

The pamphlet is intended for employers and employees alike and it is hoped that the information, now provided in a simple and accessible form, is utilized by many workplaces to encourage positive change in the employment environment in Namibia. 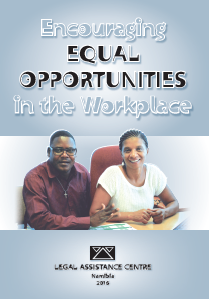 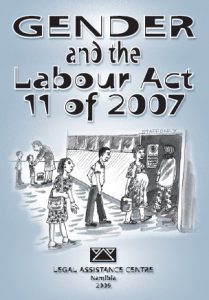 Gender and the Labour Act

The Labour Act 15 of 2004 (passed but never brought completely into force) was completely replaced by the new Labour Act 11 of 2007. GR&AP advocacy helped to ensure that the new law included provisions on sexual harassment, pregnancy discrimination, maternity leave and family leave. We made submissions on these and other human rights issues to the Ministry of Labour, the National Union of Namibian Workers, the Namibian Employers Federation, and the International Labour Organisation, and most of our concerns were addressed in the bill before it became final.

GR&AP also made submissions to the Ministry of Labour on the draft Code of Practice on Sexual Harassment.

GR&AP has produced a simple 8-page information booklet about the provisions relating to gender in the 2007 Labour Act. This booklet is available in English, Oshiwambo and Afrikaans.

GR&AP has also prepared a short training module about Gender and the Labour Act, and a comic on sexual harassment in English, Oshiwambo and Afrikaans.

GR&AP worked other LAC departments to litigate a test case on sexual harassment involving a young woman who was allegedly harassed at the workplace by her immediate supervisor. The matter was settled in terms favourable to our client before the case’s conclusion, and the settlement order stipulated that GR&AP would be allowed to publish an article about the case, without identifying the parties involved. You can read our article about the sexual harassment case here. 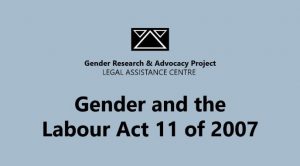 These presentation provide information on the following issues: 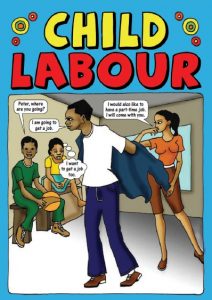 The Discussion Document on Child Labour in Namibia published by the Ministry of Labour and Child Welfare in March 2007 cites LAC research and recommendations extensively, particularly on sex work, domestic work, trafficking and child justice. GR&AP subsequently made submissions to the Programme Advisory Committee on Child Labour on legal issues which were incorporated into Namibia’s Action Programme on the Elimination of Child Labour.

Through its work with the Ministry of Gender Equality and Child Welfare on the Child Care and Protection Act 3 of 2015, GR&AP was also able to successfully put forward proposals for strengthening legal provisions on the worst forms of child labour.

For more information about child labour and child exploitation, you can read the following:

Lobbying for an extension of maternity leave

In recognition of World Breastfeeding Week in 2012, GR&AP released a press release calling on the government to extend maternity leave and benefits. This is because the World Health Organisation recommends that mothers exclusively breastfeed their children for six months. However breastfeeding in Namibia is low – the percentage of mothers who exclusively breastfeed their children for 0-2 months is 53.6%, dropping to 22.9% for children aged 2-3 months and further dropping to 5.7% for children aged 4.5 months.

One contributing factor is the lack of public awareness about the advantages of exclusive breastfeeding for six months. Another contributing factor is that maternity leave is only three months, with one month normally taken before the birth of the child. The maternity leave provision is a push factor for many mothers to wean their children early. Furthermore, the recently released government National Agenda for Children states that one of the government’s priority strategies is to promote exclusive breastfeeding for the first six months of life; however the report does not make it clear how the government intends to balance this commitment with the Labour Act and Social Security Commission’s current provision of three rather than six months maternity leave.
For more information, see the GR&AP factsheet “10 reasons to extend maternity leave to 6 months after birth” 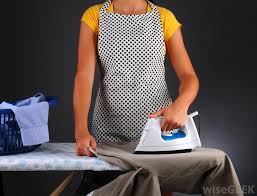 The Labour Resource and Research Institute (LaRRI) published a study on domestic workers in in 2008 – the first of its kind since 1996, when the Legal Assistance Centre and the Social Science Division of the University of Namibia published an initial report on the sector (read the summary). According to the LaRRI report, the majority of domestic workers are single women between the ages of 21 and 40 who support, on average, 2 to 6 dependants. Most of them work long hours without breaks or meals. Social security benefits, medical aid and pensions are largely non-existent in the industry. For the 20% who live in the houses of their employers, the likelihood of unpaid overtime, lack of benefits, low wages and abuse is even higher on average than for non-live-in workers. Domestic workers are clearly some of the most neglected and vulnerable women in the country.GR&AP has produced a factsheet about the rights of domestic workers to ensure that both employers and domestic workers understand their rights. These include, for example, the need to register a domestic worker with the Social Security Commission, a requirement that many people seem to be unaware of.

We have also produced a comic (English, Afrikaans and Oshiwambo) on how to claim social security benefits for maternity leave, with the main character in the story being a domestic worker.

In 2017, these regulations were supplemented by a Wage Order setting a minimum wage for domestic workers for the first time, and providing for supplementary minimum conditions of employment for domestic workers.  This Wage Order also contains rules about transport allowances, accompanying employers on holiday, food and accommodation, health and safety, uniforms, trade union access and a written contract of employment on a standardised form.
In 2018, another notice increased the minimum wage.  With effect from 1 October 2018, the minimum wage is N$1564.39/month, N$361.29/week, N$72.25/day or N$9.03/hour, and N$45.15/day for part-time domestic workers who work five hours or less on any day other than a Sunday or public holiday.  The Wage Order’s rates for minimum overtime pay and minimum pay for work on Sundays and public holidays were similarly increased.

Read articles from our archives about the rights of domestic workers and the need for a minimum wage in the sector: