The LEAD Project was launched in 1997 in recognition of the fact that many future human rights issues in Namibia are likely to involve decisions about and competition over the ownership and development of land and other natural resources.
LEAD’s vision is therefore a Namibia, where:

LEAD promotes the rights and responsibility of all Namibians to own and access land lawfully, to utilize Namibia’s natural resources in a sustainable manner; and to live in an environment that is healthy while it participates meaningfully in its development (mission).

LEAD has the following core values:

When considering matters for litigation, generally the following aspects are considered by LEAD:

Our main strategies include:

Following our vision, we have three areas under mandate, namely:

Looking back in history

The LEAD Project has been very active in all these spheres since its inception.

Building on the experience of crucial conferences like the 1991 National Land Conference and 1994 People’s Land Conference, the LEAD Project has played a vital role in the NGO Working Committee on Land Reform and has made representations to the Ministry of Lands, Resettlement & Rehabilitation (as it then was) regarding discrepancies between the National Land Policy and the then Communal Land Reform Bill – the Bill was passed by Parliament in 2002 and became law on 1 March 2003. In 2002 the Project published a report titled “One day we will all be equal” – the outcome of a two-year socio-legal research study into Namibia’s land reform and resettlement process.

At the 22nd Session of the ACP-EU Joint Assembly held in Namibia in March 1996, a resolution was passed recognizing ‘the special difficulties encountered in integrating hunting and gathering people in agricultural states’, and calling for ‘a comprehensive study of the San people in light of international conventions’.

To that end, the project conducted a research study and in 2000 published a five-volume report titled “A Regional Assessment of the San in Southern Africa” with funding from the European Union. The research report is a country-specific study of the human rights situation of the San in Botswana, South Africa, Angola, Zambia, Zimbabwe and Namibia. One volume in the series focused on gender issues concerning the San communities.

The LEAD Project, together with the Directorate of Environmental Affairs of the Ministry of Environment and Tourism and the Office of the Attorney-General, in a joint project, reviewed and redrafted Namibia’s environmental legislation.

As a result, a draft of the Environmental Management Bill was produced and submitted to government in 1998, and the drafting of an Integrated Pollution Control and Waste Management Bill was completed in 1999. Other bills into which the Project has made significant input include the Tourism Bill, Aquaculture Bill, Forestry Bill, Fisheries Bill and Environmental Investment Fund Bill.

LEAD represented the LAC at the historic 2nd National Land Conference held on 1-5 October 2018, and gave a 15-minute presentation on “Illegal Fencing on Communal land in Namibia”.

The Project has been litigating on behalf of women and children in property rights matters, especially in terms of inheritance laws. 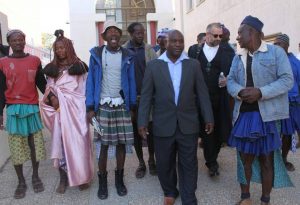 One of the more known land and environment rights cases that the project is dealing with is the controversial ‘Epupa case’, wherein the project provides legal assistance to the communities residing around the Epupa Falls area and who would be affected by a construction of the planned Epupa/Baynes hydro-electric dam.