Many of the issues which GR&AP has engaged with are hard to categorise. Although our primary focus is gender, we also look more broadly at social and human rights issues which affect women, men and children. We has also worked on international human rights issues, and on issues pertaining generally to the law and the legal profession. This page gives a sampling of some of the many issues on which we have provided research and proposals. 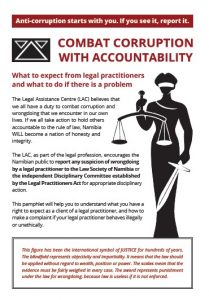 Combating Corruption in Namibia’s Legal Profession
As part of a campaign to encourage the public to report and combat corruption wherever they encounter it, the Legal Assistance Centre has produced a pamphlet on misconduct by members of the legal profession, to inform the public about what to expect from a legal practitioner and how to make a complaint to the Law Society of Namibia in cases of misconduct. The goal is to provide a model for encouraging accountability. We hope to inspire similar initiatives in other sectors. Print version

In 2017, the Law Society of Namibia commissioned GR&AP to provide a comparative law desk study of regulation of the legal profession, including outreach and pro bono activities by legal practitioners. The purpose of the study was to inform discussions around the CHANGE Project, which is aimed at developing recommendations for possible amendments to the regulatory system governing the legal profession, to ensure a proactive, trusted and relevant legal profession in Namibia.

According to the National Road Safety Council, Namibia’s road injury fatality rate far exceeds the African continental average of 26.6 per 100 000 at 31 per 100 000. This statistic translates into between 600 and 700 people killed in road accidents in Namibia every year. The costs of this high rate of road accidents extend far beyond the families and communities of those directly affected and are ultimately borne by wider society and government. GR&AP has considered the issue from a family law perspective and has published Proposals for Enhancing Road Safety in a short report published in 2016. Our recommendations include:

In 2002, GR&AP published a major piece of national research on commercial sex entitled Whose Body Is It?: Commercial Sex Work and the Law in Namibia. At the same time, GR&AP commissioned a television documentary entitled Not a Life You Ask For, based on some 30 interviews with sex workers in Windhoek and Walvis Bay.

These projects were intended to provide data to policy-makers as they contemplate law and policy reforms on sex work, particularly in light of the HIV pandemic, and to allow sex workers, as a vulnerable and marginalised group to communicate their concerns in their own words.

The research findings were discussed at a workshop in December 2002 which highlighted the human rights issues facing sex workers in Namibia today. In 2005, the GR&AP gave testimony on sex workers to the National Council Standing Committee on Gender, Youth and Information as part of its investigation to investigate “the plight of sex workers, street kids and other vulnerable persons”.

Follow-up research on sex workers was published by GR&AP in the form of a monograph, published in 2008, which reports on interviews conducted with 62 girls and women at Stand Together, a Katutura-based non-profit organisation that offers spiritual teaching, food, clothing, and condoms to women who are or have been sex workers.

The other were two shorter factsheets summarizing the more detailed Research Brief:
1. The statelessness conventions and why Namibia should accede to them
2. Improving Namibian law to prevent statelessness and to protect stateless persons
and a further factsheet on dual citizenship.

GR&AP also wrote two opinion pieces on statelessness which were published in The Namibian in January 2017:

In Namibia, forced sterilisation has particularly impacted women living with HIV. Out of 230 HIV positive women who participated in focus group discussions and interviews in Namibia in 2008, almost 20% indicated they had been subjected to coerced or forced sterilization. The Legal Assistance Centre (supported by other civil society groups) brought an action against the government on behalf of three HIV positive women who had suffered forced sterilization: LM and Others v Government of the Republic of Namibia. The High Court found that the government had failed to prove that that the women had provided informed consent for the sterilizations, although it was not persuaded that sterilizations were done on the basis of the women’s HIV status. The Court decisively rejected medical paternalism in decisions about sterilization, finding that the law should instead consider the fundamental principles of individual autonomy and self-determination. Such principles, in the Court’s view, “require that in deciding whether or not to undergo an elective procedure, the patient must have the final word.
As a follow-up to this case, in 2016, GR&AP produced a pamphlet on sterilisation and consent.

Surrogacy is an arrangement whereby a woman agrees to bear a child for another individual or couple who intend to become the parents of the child. There is no legal framework for surrogacy in Namibia. Parties considering a surrogacy arrangement in Namibia should be warned that it can be a complicated and risky endeavour in the absence of any specific legal regulation. An article with more information on this topic can be found here.

GR&AP has also produced a comic on mental health issues. It addresses depression and persons suffering from mental illness who are confined after they commit a crime. The comic combats the myth that mental illness results from witchcraft, and includes facts about mental health in Namibia.

The Namibian Government has indicated that it is not at this stage contemplating any legislation that would make vaccination mandatory across the board. The  topic of this discussion is the legality of vaccine mandates imposed by employers or other private entities.
Some argue that vaccine mandates are both constitutional and ethical, on the grounds that the minimal interference with personal liberty is justified by the need to protect the public and the need to utilise limited public health resources efficiently, in light of the fact that the burden on health care services posed by Covid affects everyone who needs to access those health services. Others argue that vaccine mandates may be counterproductive.
This short paper looks at the Namibian legal background to vaccine mandates, as well as recent legal developments around the world. Note that this is an emerging and developing area of law. At the time of writing, there were pending court cases in many jurisdictions which are not discussed here; this document discusses only court cases that have been decided as of September 2021.