16 April 2021 – Namlex and annotated Statutes and Regulations
We are happy to announce a full update to our Index to Laws (NAMLEX) and annotated statutes and regulations as well as Covid-19 rules.  All information is current up to 31 March.  To find out about Namibian law and the availability of the databases read here or go to the relevant drop-down menus.
We also have published full indexes of Pre-independence gazettes  as published by the official Government gazette  printers.  These are for historical research and not necessarily current any more.  Pre-independence gazettes will be published as available.

Last week was a good week for us!
We are proud to announce that LAC trustee, Esi Schimming-Chase has been appointed as Judge in the High Court of Namibia as from April 2021.
We congratulate Esi on her appointment as Judge and are confident that she will acquit herself well in this very demanding position.

Our young Social Justice team had their first appearance in court.  They won their case in the Katutura Magistrate’s Court in the fight against domestic violence.  The SJP team successfully argued for an interim protection order to be made final.  Read more on our Blog.

March 2021 – Probono 55 – CCPA – Harmful practices
Are initiation customs such as sikenge and olufuko harmful to the girls who take part in them? Press reports on these rituals quote positive and negative perceptions from different participants.  Read more in our ProBono.

4 December 2020 – The Law and Oil Exploration in Namibia
It has recently been reported in the media that Reconnaissance Energy Africa, a Canadian mining and exploration company, plans to prospect for oil and gas in the northeastern regions of Namibia bordering Botswana. In view of this announcement, this article aims to give a brief overview of the applicable legislative framework that regulates mining activities in or near environmentally sensitive and protected areas.  Read more and view the photos of the recent demonstration. 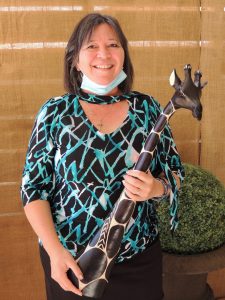 Congratulations to the LAC team on winning this prestigious “Award for Human Rights Excellence” at the annual general meeting of the Law Society for a 5th time!  Our Director, Toni Hancox, accepted the reward on behalf of the LAC from Ngamane Karuaihe-Upi and Amanda Hauanga.  Also in the Economist.

November 2020 – LEARN ABOUT THE LAWS OF NAMIBIA
Legal Information Online

The rule of law requires that laws must be accessible to everyone. The Legal Assistance Centre (LAC) has for many years now been publishing information to help members of the public know the law of Namibia as it stands today.
The LAC publishes three free legal databases to inform the legal profession and the public about the laws in force.
In 2020, the LAC and the Ministry of Justice entered into an agreement making all of these databases into a joint project to ensure their long-term sustainability. 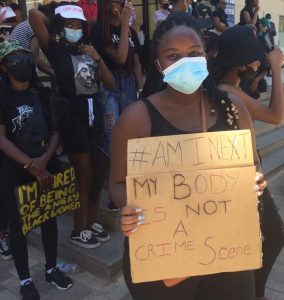 11 October 2020 – Let the people raise their voices without fear
The Legal Assistance Centre as a public interest law firm respects the need for the police to maintain law and order. What the Legal Assistance Centre does NOT CONDONE is the heavy handed response to the protestors against SGBV that has rocked our capital in the last days. The police should only use reasonable and justified measures to avert damage to life or property. The use of tear gas against the protestors is neither reasonable not justified.
In a democratic country we are permitted to raise our voices. Sexual and Gender Based Violence has become a scourge in our country. The Government’s lack of action has prompted the current protest.
The President and government are called upon to respond to the pain of its people and take the needed action to prevent SGBV urgently.
In the meantime, let the people raise their voices without fear. -Toni Hancox
The Minister of Justice Yvonne Dausab said on social media that the amendment of the Combating of Rape Act is currently being prepared for parliament.
Read additional news: Namibian or Pdf on this event and more on the arrest here.

We, the Legal Assistance Centre, being a public interest law centre, collectively strive to make the law accessible to those with the least access, through education, law reform, research, litigation, legal advice, representation and lobbying, with the ultimate aim of creating and maintaining a human rights culture in Namibia.

We have published some more powerpoint presentations for police training and interested public on the Child Care and Protection Act.

Neither here nor there

What BIG is all about

View our film on Netflix and read more on the awards and current happenings.
For more information please see the Baxu webpage.

Here with our Annual report 2019. It showcases a selection of activities to give the reader an idea of how the organisation pursued its vision in the period under review.

Presenting our Annual report 2018. It list our work and activities, new publications, donors and much more.