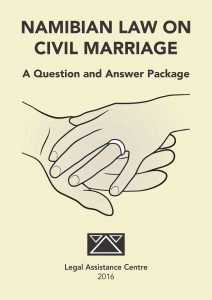 Marriage is a demonstration of love, but it is also a legally-binding agreement. Marriage is a form of contract, and it is important that couples are aware of the rights and duties that go with marriage.

When a couple plan their wedding, the last thing they want to discuss is divorce, domestic violence or death. Every couple hopes that their marriage will last forever, but this is not always the case. So couples need to know at the outset what would happen in the case of separation or divorce. Also, all marriages eventually end when one of the partners dies, and it is important to understand how death will affect the surviving spouse.

The publication Namibian Law on Civil Marriage: A question and answer package provides information on these and many more issues.

The booklet has been designed to assist marriage counselors to inform couples about the basic legal issues associated with marriage. It may also be useful to other people who work with engaged and married couples. The booklet will also be helpful to couples who are thinking about getting married.

The Married Persons Equality Act 1 of 1996 was instrumental in abolishing the unconstitutional marital powers of the husband and placing husbands and wives in Namibia on an equal footing.  Men and women who are married in civil marriages in community of property must consult each other on all important financial transactions, as equal partners.  To explain how the system works, GR&AP has published a detailed Guide to the Married Persons Equality Act  (in English, Afrikaans, and Khoekhoegowab) as well as a shorter Summary of the Act  in (English, Afrikaans, Khoekhoegowab, Oshindonga, Otjiherero, Rukwangali and Silozi).

GR&AP has also produced a number of simpler materials on this law :

In 2005 GR&AP published a report focusing on comparative law and law reform recommendations pertaining to marital property: Marital Property in Civil and Customary Marriages: Proposals For Law Reform. This report includes recommendations on how the Married Persons Equality Act could be strengthened. 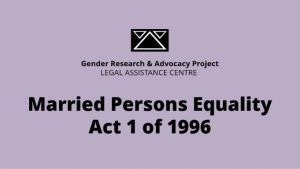 The Child Care and Protection Act 3 of 2015 has made a new rule about the age of consent to marry. This law says that the minimum age for marriage is age 18 for both civil and customary marriage. However, although the age of majority has been changed to 18, there is one exception to the rule that anyone over the age of 18 has independent legal capacity: Persons under age 21 need the consent of a parent or guardian in order to marry. Persons under 18 needs parental consent AND written permission from the Minister responsible for home affairs.  A forthcoming new Marriage Act is expected to prohibit marriage by persons under age 18 with no exceptions.

Marriage to a Foreigner

From the queries received by the Legal Assistance Centre on a regular basis it seems that many couples are fraught with concern that their non-Namibian partners will be deported at any time should he or she not have a valid permit to reside in Namibia.

Our first port of call is the Immigration Control Act no. 7 of 1993 (“the Immigration Act”) which, among other things, regulates and controls the entry of persons into Namibia.   Second call is the Namibian Constitution and here follows a more detailed article on this topic as a whole.

In conclusion, it appears that the law as a whole, from the Constitution to the Immigration Act, supports the contention that a person who marries a Namibian citizen
acquires domicile thereby and has the immediate right to live and work in Namibia without requiring any form of permit to do so.