The Divorce Bill: What is good and what not?

The latest draft of the Divorce Bill was recently circulated for public comment.  Much of the Bill is a very welcome change to Namibia’s antiquated fault-based divorce law.

The current outdated law requires a guilty spouse and an innocent spouse, and necessitates a personal appearance in the High Court. This means that divorce is currently so expensive and inconvenient that some married couples just separate without formally divorcing, which can cause havoc – particularly with respect to inheritance issues when one spouse dies.

The Bill would provide only one basis for divorce: irretrievable breakdown. If one or both spouses allege that the marriage is past saving, then the court would have to issue a divorce order – although the court could mandate a short waiting period to allow for possible reconciliation if one spouse believes that the marriage can still be saved.

Another positive innovation is that the Bill would make it possible for spouses to make a joint application for divorce if they are in agreement that the marriage has failed. It also encourages mediation and settlement agreements, in an attempt to reduce conflict.

There are safeguards throughout the Bill to ensure that post-divorce arrangements protect the best interests of any minor children of the marriage. Even if the parties agree on arrangements for the children between themselves, the court must still check to make sure that the children’s best interests are being served. One welcome provision would give courts the power to make orders on access to children of the marriage by members of the spouses’ extended families – to make sure that acrimony between the divorcing spouses does not deprive the children of the chance to maintain connections with other family members.

The Bill also paves the way for making divorces more accessible, by making provision for certain designated regional magistrate’s courts to hear divorce cases in the future. This would go a long way towards making sure that it is not only the rich who can afford to get divorced.
So what is worrying about the Bill? The biggest concern is a recent change to the draft which would preserve the fault-based notion of “forfeiture of patrimonial benefits”. To understand how this works, a bit of background explanation is required.

In a marriage that is in community of property, the norm is to divide the assets in half upon divorce. The two spouses will usually have contributed unequal amounts of income and property to the marriage, so in the 50-50 division one spouse will typically gain some “benefit” from the other spouse’s contributions. The current law allows for the spouse who gained the “benefit” to “forfeit” some of all of this benefit if that spouse has engaged in misconduct, such as adultery or domestic violence.

So what’s wrong with that? For one thing, this system tends to disadvantage women. It is a practical reality that wives in our society tend to earn less than husbands, often because they play a bigger role in the unpaid work of domestic duties and child-rearing. Where the husband earns more, only the wife will have any “benefits” to forfeit; for instance, if the wife of an adulterous husband made lower financial contributions to the marriage than the husband did, his behaviour will not be financially punished because he has no benefits from the wife that can be forfeited.

This discrepancy has caused one South African court (and several commentators) to speculate that the law on “forfeiture of patrimonial benefits” may be unconstitutional.[1] The South African Law Reform Commission recently raised the possibility of removing this principle from the South African Divorce Act for the same reason.[2]

The other problem is that encouraging parties to argue about whose “fault” it is that the marriage has broken down in the context of property division simply reintroduces fault through the back door – and thus undermines the idea of moving towards less contentious divorces that can be concluded cheaply, quickly and amicably. Acrimony between divorcing spouses is also likely to be damaging to children of the marriage, who are unavoidably caught in the middle, and it may discourage out-of-court settlements.

Is it even possible for a court to assess marital misconduct? The Namibian Supreme Court has quoted with approval a statement from a South African case on the complexity of assigning fault for the failure of a marriage, saying that “it is now widely recognized that causes for the breakdown in marriages are far more complex. Quite frequently adultery is found to be the result and not the cause of an unhappy marital relationship. Conversely stated, a marriage in which the spouses are living in harmony is hardly likely to be broken up by a third party.”[3]

In any event, other provisions of the Divorce Bill give courts discretion to adjust the standard division of assets to achieve a fair outcome after considering a list of specified factors, including the underlying matrimonial property regime, the duration of the marriage, the direct and indirect contributions of each spouse (including domestic duties and child care), their respective financial positions, which spouse will have custody of any children of the marriage, and whether one spouse will be paying spousal or child maintenance. These kinds of factors seem to be a sensible basis for adjusting the division of property, and much less likely to lead to conflict than rehashing the issues that led to the divorce.

Another concern in the current draft relates to settlement agreements between divorcing parties. The current draft would require parties to get legal advice on a private agreement, even if they were not seeking to have their agreement made into an order of court.  It would require the involvement of lawyers even in cases where there are no children and few assets to divide, and even where the agreement was a product of mediation with a trained facilitator.

One of goals of the law reform is to make divorce affordable to everyone, and to open the door to do-it-yourself divorces that do not require the use of lawyers. The previous draft gave the court a duty to consider a few basic criteria to test the fairness of any agreement between the parties, without requiring the involvement of legal practitioners. While it is probably useful for divorcing spouses to consult lawyers if they can afford to do so, requiring this in all cases where the parties want to settle their differences would add unnecessary extra expense and disadvantage members of the public with limited assets at their disposal. 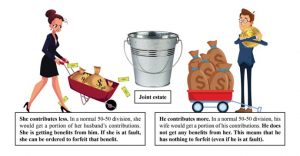 A third problem of note is the failure of the Bill to make any mention of the right of child participation. Namibia is a party to the Convention on the Rights of the Child, which guarantees in Article 12 that any child who is capable of forming his or her own views has the right to be heard “in any judicial and administrative proceedings affecting the child” – and that the views of the child must be given “due weight in accordance with the age and maturity of the child”. This principle has been detailed in the Child Care and Protection Act, but it needs to be incorporated into divorce proceedings, which affect children intensely.

The Divorce Bill has many positive features, and with a few more changes it could become a model of fairness and practicality. We welcome this long-overdue law reform, and hope that the few remaining wrinkles in the draft can be ironed out before the Bill is tabled in Parliament.

This article was made possible by support from the European Union.

Probono on Admission of Guilt in Covid Times

An admission of guilt fine refers to the situation where a person who has been charged with a crime that... read more

The Combating of Immoral Practices Act 21 of 1980 is a law that is much misunderstood. Many have called for... read more

ProBono on Environmental Assessments in Namibia

Article 95(l) of Namibian Constitution is the focal point for the protection of Namibia’s environment. It declares that the Government... read more

Probono on Ancestral Land Rights and the Restitution Bill

Background In one of our previous ProBono columns we talked about Commission of Inquiry’s report on Claims of Ancestral Land Rights... read more

A Sex Offender Register For Namibia? Right Idea, Wrong Solution In 2017, hundreds of people gathered outside a house in Katutura... read more

Recently, The Namibian ran an article about men being “deceived into fatherhood”. This article was disturbing, but it presented only... read more

Background The restitution of ancestral land rights in Namibia has since independence divided opinions. Some argue that it is a fitting... read more

What is Namibia doing about Urban Land Reform? Background For the best part of the first two decades after Namibia’s independence, the... read more