The Social Justice Project (SJP) of the Legal Assistance Centre is the main litigation unit of the organisation. Unlike the other units, which focus on specific human rights issues, SJP will engage in test case litigation in relation to any Constitutionally protected human rights such as   cases involving the right to dignity, the right to privacy, the right to culture, the right to education, the right to found a family and any other fundamental rights.
It must be stressed that, in general, only test case litigation will be attended to since there is little public interest in taking matters to court which have already been ventilated and in which legal principles have already been established and are being followed.

Since Huricon has become merged with the AIDS law Unit, we have decided to give it a new name – hence Social Justice Project.

Our mission being to make the law accessible to those with the least access thereto and to interpret human rights as including socio-economic rights. Once referred to as the HURICON department, the SJP’s vision continues to address violations of human rights protected under the Namibian Constitution focusing primarily on the violations of Social Justices such as the right to access water and sanitation; healthcare; inclusive education for people with disabilities; children’s rights, the right to own property, and other emerging issues as required from time to time. We still deal with cases involving discrimination on the basis of one’s HIV status.

Although our primary focus is  litigation for both test cases and public interest impact litigation, we have taken responsibility for empowering the nation by educating, lobbying and advocating for socio-economic rights at grassroots levels from which we will derive the relevant cases to pursue in a competent court as well as at ministerial level.

In this we hope to assist in the alleviation of poverty in Namibia by empowering the people of their human rights as protected and guaranteed in a democratic society. No right exists isolated from the other the same way as no government exists without the people to govern.
The SJP’s overall objectives remain the same as that of HURICON: to contribute to and to promote a sustainable human rights based democracy founded on the rule of law: respecting human rights and freedoms. 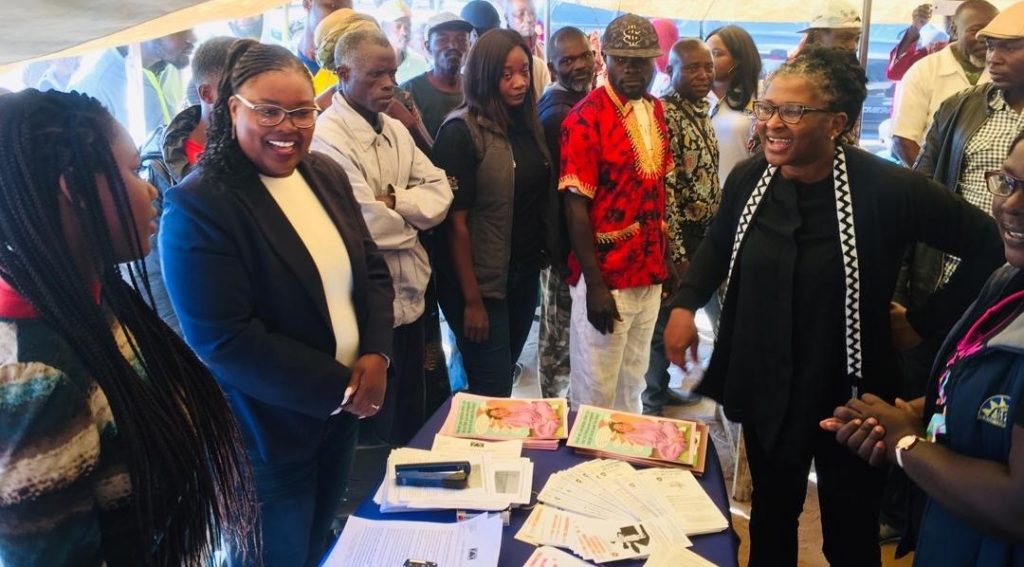 Above:  Sharen Zenda and Umunee Matundu at the #BeFree campaign with the First Lady, Monica Geingos in July 2019.

By doing this we uphold a democracy based on human rights while using the following strategies: