The systems of land administration in Namibia correspond to different land tenure systems. On the one hand, 43% of the land area is held under freehold title by individual landowners, close corporations or companies. This land is registered in the Deeds Office in terms of the Deeds Registries Act (SA), 1937. The Registrar of Deeds is appointed in terms of the Act and is responsible for the “recording of [freehold] land rights and transfers of [freehold] land rights, registration and cancellation of mortgage bonds, registration of leasehold agreements, servitudes and other real rights as well as  to register general plans for plots and sub-divisions within the different land tenure systems.”
This system provides accurate descriptions of land parcels, their legal owners, and the rights and obligations that apply.
Another 39% of the land area is commonly referred to as “communal”. In 2014, just over 40% of Namibia’s population of 2 234 million lived in agricultural households in communal areas. The Namibia Census of Agriculture 2013/20142 recorded 169 984 agricultural households, with a total population of 907 715, holding tenure rights to agricultural land in communal areas. Ninety-two per cent of these households lived in the seven northern-central and eastern communal areas in which rainfed cropping and livestock husbandry are the main agricultural activities. Only 8% lived in the other seven regions which rely primarily on extensive livestock farming for their livelihoods.
Strictly speaking, the term ‘communal’ is a misnomer in so far as not all tenure rights in these areas are communal, and they differ across communal areas. Households in communal areas have private tenure rights to their homesteads, cropping fields and cattle pens, which are held as customary land rights in terms of the Communal Land Reform Act 5 of 2002 (CLRA). In many areas these rights are exercised on land parcels that are clearly defined by enclosures of one kind or another. Private rights to communal land do not amount to outright ownership, but are defined by the fact that these rights include rights of exclusion and inclusion of outsiders. What is common to all communal areas in Namibia is that, with the exception of formal townships which are declared
in terms of the Local Authorities Act 23 of 1992, freehold title cannot be acquired for any land. Referring to these areas as non-freehold areas is therefore more fitting.
Apart from private land rights, access to land and natural resources for a majority of agricultural households and the rights under which these are held are governed by various forms of customary tenure. The CLRA refers to these areas as the “commonage”. This type of tenure is informal in so far as land rights and their legitimate holders are not recorded in a formal written form, unlike private customary land rights. The security of these customary tenure rights is provided primarily by group membership. In addition to customary tenure rights, the CLRA has introduced long-term leasehold tenure in clearly defined parts of communal land to encourage economic development.
Traditional Authorities still play a central role in the allocation and cancellation of existing customary land rights as well as the allocation of new rights. They are the primary land governance institutions, implementing and changing local customary laws and practices. However, various factors conspired to render customary land governance systems increasingly ineffective in securing people’s legitimate tenure rights, rendering land rights holders increasingly vulnerable to infringements of their rights. The increasing demand and competition for land have brought pressures to bear on customary governance frameworks. Across many countries the driving forces for the increased demand and competition for land include: 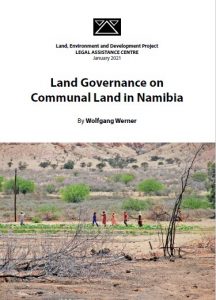 In addition, environmental changes such as the increase in longer droughts and the unpredictability that this brings put pressure on grazing areas, leading to the conflict. This is exacerbated by the negative impact of private enclosures which reduce communal grazing areas and contribute to overgrazing in Namibia’s communal areas.
In addition to these drivers, the political changes that followed Independence further eroded the capacities of Traditional Authorities to administer customary land tenure in an efficient manner. While customary laws and practices were generally well known, the ability of Traditional Authorities to enforce these diminished rapidly.
To further elaborate on this, we have published a research brief, written by Wolfgang Werner.

On quite a different note, we also have published this scholarly article:

The Seditious State: How to shake the poor from the communal-land safety net

The article concludes that “the moral application of Namibia’s rule of law remains a myth in the daily lives of the N‡a Jaqna Conservancy members, who are struggling against the illegitimate brand of rule of law meted out at that marginal local level. Failing state morality, the substance of any rule of law as a constitutional concept can then only have meaning in a society which has an independent and enlightened Judiciary to scrutinise another institution of state. But then again, this constitutional idea in itself is premised on the myth that all people have equal access to law in order to meaningfully realise their Article 12 rights under the Namibian Constitution.

Paradoxically, access to law requires economic empowerment, which cannot be achieved because unlawful state action precludes any social and economic development and upliftment for the Na‡Jaqna Conservancy and local community members to afford the luxury of realising these rights.

With the !Kung community still denied access to justice and fair administrative action, the game of dressing up organs of state as customary thrones continues, the economic and political elite thrive and resources are plundered as an indifferent society looks on, while the naïve and disempowered poor are shaken from the safety net of communal land by an uncaring and indifferent State, the latter undermining its own Constitution and inciting hostility towards the State as a result.”
Written by Peter Watson

And in this article, based on case material, a similar evaluation of the application of Namibia’s CLRA followed by recommendations to betterment: 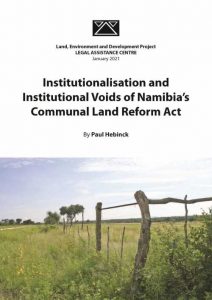 In short: Not all TAs are the same, in that they display different affiliations and leadership crises. CLBs are understaffed and lack human and financial resources. The role of the state is ambiguous, to say the least, given that the Government is attempting to depoliticise issues which have become highly politicised over the years and involve high-ranking politicians and business elites. The Government is also interfering with local politics by appointing chiefs and relocating illegal grazers to land belonging to others, this being extremely problematic and undemocratic. The role and rule of law are shaped by clearly defined legal rules, assuming there a single, coherent legal system. The reality of what we called ‘authority in the making’ tells us that it is more useful to be aware of the ambiguity and contested nature of rules. Moreover, the legal separation of rights to land and the ontology of land cripples the litigation. This separation makes it impossible to incorporate the reality that unfolded over time in the N‡a Jaqna and Nyae Nyae Conservancies and the Ukwangali territory in Kavango. The controversy is as much about (human) rights as about the use of land and the resources. In the end, the issue is what constitutes the future for N‡a Jaqna, Nyae Nyae and the Ukwangali, and who has the right to determine that.

Recommendations:
Firstly, going beyond the noted and observed controversies and litigation would require harmonising policy processes to arrive at consistent policies to avoid contradictions between the various departmental agendas and land-management plans. This was suggested by Wolfgang Werner during the Second National Land Conference held in 2018. However, this would demand that state is staffed by a well-trained and non-technocratic-oriented bureaucracy capable of translating legal pluralism into policies that revolve around plural legal orderings as well as land having different ontological meanings. Such policies would resonate with locally accepted and shared notions of development, and would further pave the way for conservancies and other resource communities in an alliance with land-based NGOs in the rural, peri-urban and urban domains in Africa to become involved in dealing with land issues beyond rights only.
A second area would be to strengthen CLBs by screening membership and providing support for registering and social analysis of existing and looming disputes and conflicts. An in-depth study of the frequency of illegal fencing and grazing reporting is required at CLB and TA level. Such a study would provide further insights into the capacity issues that these institutions have to deal with. Disentangling and documenting the multiple dimensions of the conflicts and disputes is a necessary instrument for handling the controversy. CLBs would perform more accurately if given the necessary resources to operate. This includes financial and human resources, and the latter would include adding, on a temporal basis, trained anthropologists and/or rural sociologists as fieldworkers. This would increase the capacity to explore the nature and history of disputes and conflicts. This in turn would allow for negotiations that increase the opportunity to solve matters before they go to court. Litigation, after all, is the last resort when dealing with disputes.
A third area would be recommending that High Court judges take account of all dimensions of legal pluralism. This would include basing legal judging on a socially informed analysis of the nature and dynamics of disputes and conflicts, rather than on their form alone. This is an area where public litigators and legal academics should engage at the socio-academic level with the Judiciary to establish a legal culture that fosters emancipation.
Written by  Paul Hebinck